In this commentary to commemorate the first ever United Nations (UN) International Day of Clean Air for Blue Skies on 7 September 2020, UrbanBetter founder, Prof Oni sets out the importance of air quality for health and the threats to health posed by urban development processes that worsen air quality for the majority.

Read the commentary below:

The air we breathe is precious and sustains all life on the planet. However, 9 out of every 10 people in the world breathe air with pollution levels that exceed the World Health Organization’s guideline limits. Levels of air pollution are highest in Africa and Asia, where a higher number of countries are undergoing rapid urbanization.

Within this statistic lies an even uglier truth: that within cities, countries and regions, the poor and disadvantaged are both more exposed to polluted air and less able to protect themselves from its harmful effects.

High levels of air pollution globally pose a threat to both the environment and to human health. Many sources of air pollution, such as fossil fuel combustion, are also high CO2 emitters. Air pollution is also one of the leading risk factors for premature death globally; 3.4 million deaths each year are attributable to outdoor air pollution.

Exposure to air pollution is also known to exacerbate other diseases, for example, increased hospitalisations among children with asthma. There is also increasing, though at the time of writing not conclusive, evidence linking air pollution to the number of cases and severity of COVID-19.

The same regions where outdoor air pollution exposure is greatest are also experiencing an emergent epidemic of non-communicable diseases (NCDs) which often affect people during their economically productive years, with implications for lost productivity and sustainable societal development. Diet and physical activity represent two of the four modifiable risk factors associated with diseases that contribute to over 80% of the burden of NCDs globally, and both factors are influenced by air pollution. The process of food production contributes to air pollution, and conversely air pollution poses a threat to food production and food security. Similarly, while the most equitable means to promote physical activity is through public spaces that support this behaviour, the health risk posed by air pollution hampers people’s ability to embrace such health-promoting behaviours.

Clearing the air in Africa

Addressing this global challenge will require a coordinated concerted effort to tackle air pollution in Africa. The African continent is characterised by widespread rapid urbanisation coupled with unplanned growth; the continent is projected to have the fastest rate of urban growth globally. In this context, it is critical that planetary health foresight is central to urban development. At present, however, air pollution – largely from industrial sources, motor vehicles, burning biomass and desert dust – kills more Africans than unsafe water, unsafe sanitation or childhood malnutrition, with significant implications for human development. As egregious as these statistics are, they are likely to be an underestimate given that air-quality monitoring is sparse and disjointed across the continent; only seven of the 54 countries in Africa have functioning real-time air pollution monitors collecting this data.

The impacts of air pollution and health are also not equally distributed due to the link between air pollution exposure and poverty, with the poor more likely to live and/or work in spaces and places with particularly poor air quality. As such, detailed analyses of air pollution in Africa are often a challenge to compile. This highlights the need for significant improvement in the quality and accessibility of innovations such as low-cost sensors, cloud computing and data science tools. Scaling of such interventions will require commitments from both public and private sectors to contribute to improving the air quality monitoring capacity across the continent. In addition, achieving the co-benefit of improving health will require academic partnerships and transdisciplinary research to better understand air pollution exposures, how air quality influences the likelihood of embracing healthy behaviours such as physical activity, as well as evaluating the impacts of air pollution interventions on the health outcomes of the population, particularly vulnerable groups such as children and those with pre-existing diseases such as asthma.

A second pan-African characteristic is its young population; the median age across the continent is just 20 years old. Young people are important in the fight against air pollution because the exposures encountered and behaviours learnt during childhood, adolescence and young adulthood shape a person’s future health. In addition, the growing sense of autonomy, independence and agency associated with adolescence and young adulthood make this population group important agents of societal change. Africa’s dynamic cities, filled with young people, are places of hope; one recent youth survey revealed rising Afro-optimism driven by individual responsibility, entrepreneurship and confidence in an African identity.

Harnessing this sense of hope among young people will be an important ingredient in driving the change to address this planetary health challenge in Africa.

On 7 September 2020, the world will celebrate the first ever United Nations (UN) International Day of Clean Air for Blue Skies. This resolution was adopted by the UN General Assembly in recognition of the need to address the health and climate impacts of air pollution, without which the Sustainable Development Goals cannot be achieved. This day affords the opportunity to highlight the scale of the challenge, to raise public awareness of the importance of clean air for health and livelihoods, and to share promising practices being undertaken by communities, organizations and cities to combat air pollution.

One such initiative is the UrbanBetter #blueskychallenge. This project invites youth from across Africa to share, in their own words and language, what clean air means to them, what initiatives and solutions are being taken in their cities to improve air quality, and their perspectives on what they think their cities should be doing to tackle air pollution.

With every breath, we inhale the future of our health and of the planet. Beyond the single commemorative day, initiatives such as the #blueskychallenge can play an important role in shifting the norms on urban development policies towards a win-win strategy for climate and health in Africa and globally. Amplifying the voices of youth is a critical foundational ingredient to mobilise a growing demand for better air, better cities and better health. 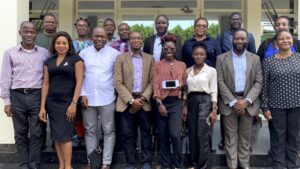 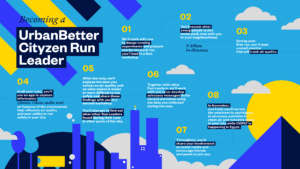 Passionate about clean air and healthier public spaces for physical activity in your city?
UrbanBetter is looking for Run Leaders to support its Cityzens for Clean Air campaign!

The second webinar hosted by the Africa Community of Practice of the ISUH on the 28th of April 2022 centered around “Urban Health Governance”. This was a sequel to the inaugural webinar which is part